I used to think I'd have to wait until I had girls to make fun clothes for my kids, but then I found and fell in love with I am Momma-Hear Me Roar. She makes the greatest clothes for her boys! I thought it would be fun to make something cute for Jace for the 4th of July, and loved how people are using ties in casual little boy clothes. I used a tutorial that I found online for turning a t-shirt into a romper, and followed the basic premise for making a brand new romper for my little guy. I patterned it after a romper that fits him width, but is too short in length, so I made the new one a little longer (my kid is thin and long). I used up the last of the blue fabric from my star wreath (and still have no idea where it came from in the first place), felt left over from a Mr. Potato Head costume I made last week (for a VBS skit... no pictures because it looked more like a real spud crossed with the tortilla Mr. Potato Head in Toy Story 3), and some bias tape left from a changing pad I made a while back. I kept giggling as I made it and am thrilled by how it turned out. If only I could justify waking Jace up to try it on...

I didn't have enough fabric to make sleeves, so it'll be a bit of muscle-t style :) 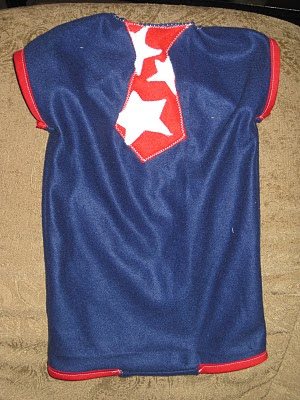 The tie close up 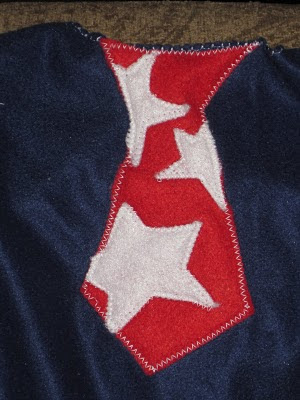 I wasn't feeling so good this time last year thanks to a growing little boy inside of me, so when the 4th of July rolled around, I may have still had winter decorations out. This year I managed to get them put away in the spring time! I'm taking a few days off to recover from VBS last week and wanted to use some of this time to actually decorate for the 4th. While browsing some blogs, I saw a challenge/contest for making something crafty that used the colors red, white and blue (check it out here).

I started with this (red fabric leftover from my curtains and a diaper bag, striped fabric from another bag I made, blue from who knows what, and cream from a project I did as a middle school student): 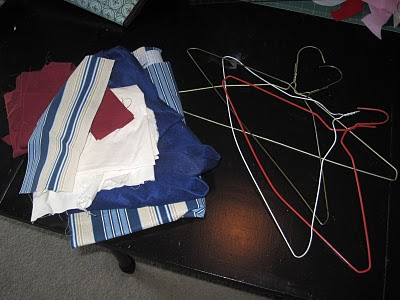 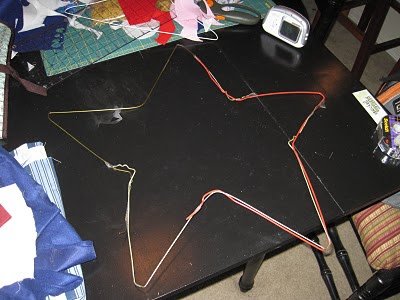 The wrapped the star in some of the blue fabric, hot gluing it in places (I figured any lumpiness and odd shape would be hidden by the time it was finished 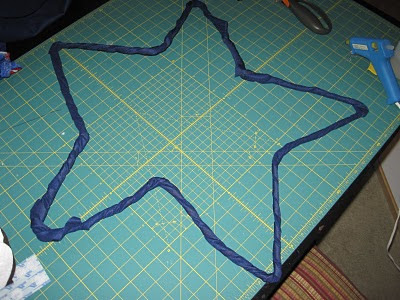 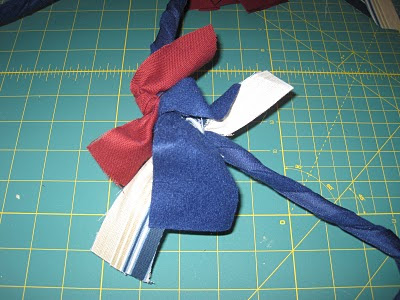 I gave it a bit of a hair cut to even out the lengths of the strips and hung it on my front door! It was a great, easy, free way to add some patriotic flavor to my front door. 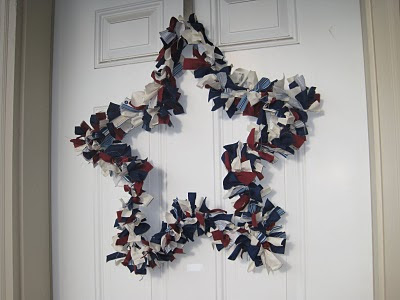 My college dining room table and chairs could only last for so long. When the time came for an upgrade, the budget wasn't quite ready. So we had the challenge to re-furnish our eating space with very limited funds. I had already been watching Craigslist for months, so I knew what to expect as far as prices went and was ready to jump when an amazing deal came along. We found five chairs for $20. The seats were originally a woven jute, but 3 of the 5 chairs were badly damaged (not to mention, they were all ugly). The chairs also had four inch spindles on the top of them. There were 3 side chairs and 2 captains chairs. We cut the spindles off the top, as well as the arms of the captains chairs so they'd all be matching. Nolan added a little bit of black paint to where he cut the pieces off, and touched up a few spots. Then he had the horrible task of cutting off all the jute. When he finally finished that, he cut seats out of MDF for me. I used old, detached seat cushions as stuffing, and covered the seats with cute fabric the coordinated with my curtains. And easy way to make some cheap chairs look great! 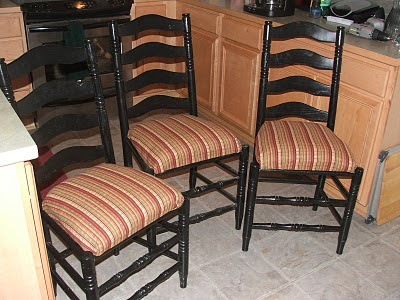 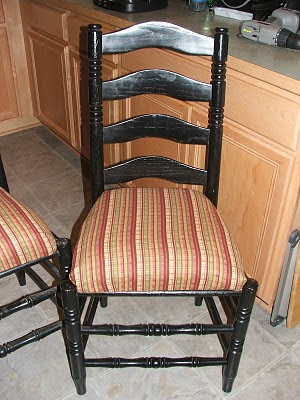 Our table has a bit of a story too... This table was bought by my aunt in Texas over 30 years ago. She then gave it to my mom, who used it as a buffet (it has drop leafs on each side). When my family moved from California to Oregon 22 years ago, the movers lost one of the legs. My dad took one of the remaining 3 to a coworker who said he could make a matching one. The coworker ended up leaving, never making a new leg or returning the old one. When my parents moved to Maryland 4 years ago, the table and two legs moved with them. Then, 3 years ago, my brother moved from Virginia back to Oregon and they gave him the table (and two legs) to bring back with him. We offered to take it off his hands (after all, who needs a table with only 2 legs?), and were thrilled when we found pre-made legs at Home Depot for only $11 each! A few coats of paint, and this table was usable again for the first time in almost 20 years! We love it and especially loved when we found chairs to pair with it. 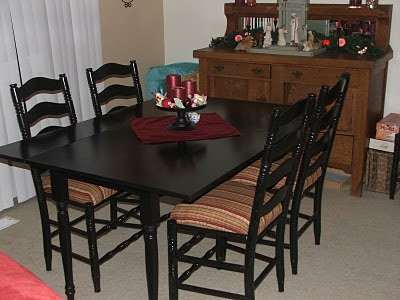 I made my first messenger bags as Christmas gifts in 2008. Because finances were tight for many in my husband's family, we all decided that if a gift was given, it had to be homemade. It was fun to have this challenge. I chose to make messenger bags for all the girls, and matching smaller bags for their daughters. The guys got cookies. A few months later I decided to adapt the bag into a diaper bag for a friend's baby shower. It was simple to do, and I especially liked that it didn't look like a diaper bag from the outside. Since then, I've made several more, adapted my pattern, and been really happy with the outcome. My favorite bag (which I still need to take a picture of) is the one I made for my son before he was born. I had bought the fabric for a different bag months before I even found out I was pregnant with him. As soon as I knew we were having a boy, I was excited about the bag it could be for Jace.

Before heading to Maryland this past May, I saw a beautiful diaper bag on Etsy. Only problem, it was $140. I decided to try to just make up a bag like it using fabric I had sitting around. I'm pleased with the outcome, loved having it for our trip, and looking forward to trying another one (this time with fabric that would better show off the pleats, and making adaptations to simplify making it). My version of the pleated bag: 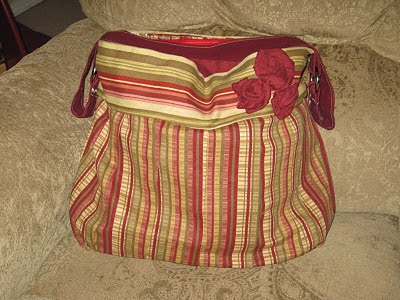 I loved using the rosettes so much on my mother-in-law's gift, that I had to do more on this bag. The striped/plaid fabric is left over from covering my dining room chairs, and the solid red is from my living room curtains. The O-rings were cut off of an old purse I planned to get rid of. 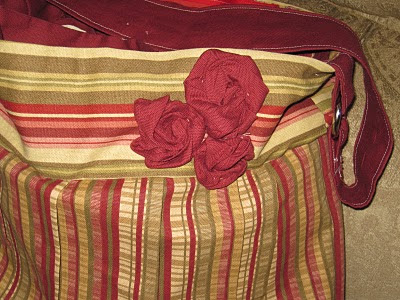 Great storage space! This makes a wonderful purse/diaper bag so I don't have to carry two bags. 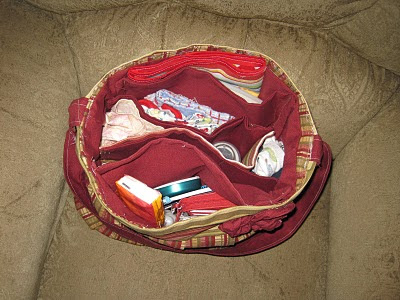 A messenger/diaper bag I made for my friend Becca. 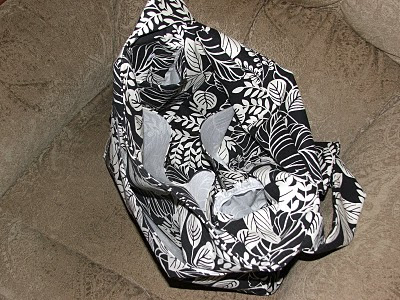 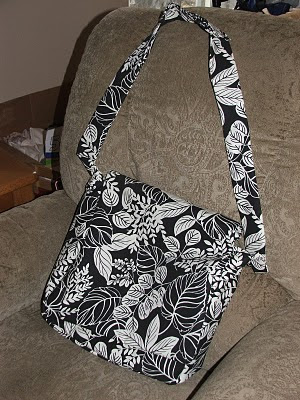 My first messenger bag adapted into a diaper bag. I couldn't find my original pattern when making it, which meant it turned out bigger than intended. That worked out well for my friend, though, since she had a toddler and a baby. 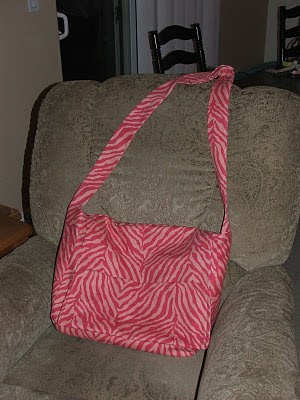 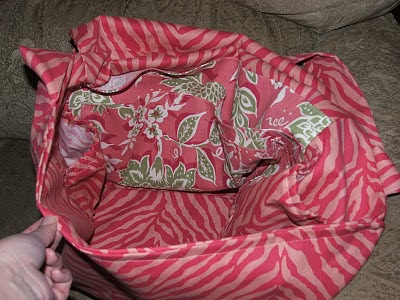 My niece, Jamie, modeling the bag that matched her mom's. 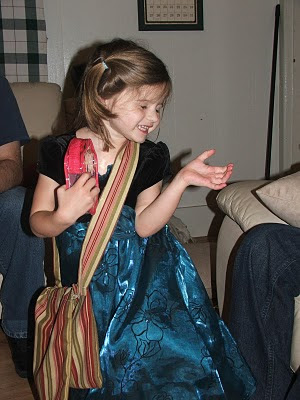 Sister-in-law Danielle and niece Madison with their bags. 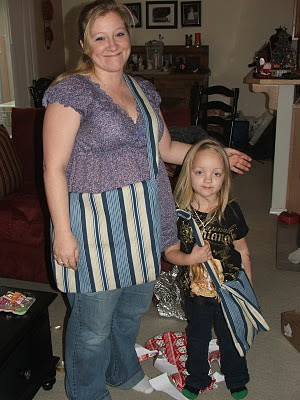 Sister-in-law Rayanna and her bag. 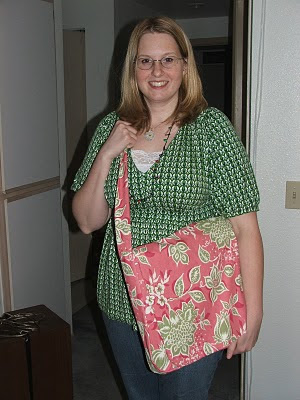 I saw this post at eighteen25 and knew it would make the perfect Mother's Day gift for Nolan's mom. After making the brag books, Nolan pointed out that while they were perfect for his mom's purse, what would stop them from getting damaged? Using some left over fabric from another project, I made a carrying pouch, and used this tutorial to make the rosette and cut a leaf from the fabric and stitched around the edge to make the perfect embellishment. I was pleased with how it all turned out, and my mother-in-law loved it.

The completed bag holding the books 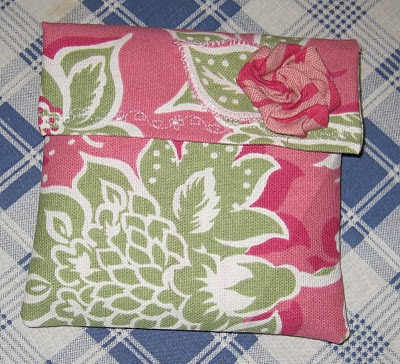 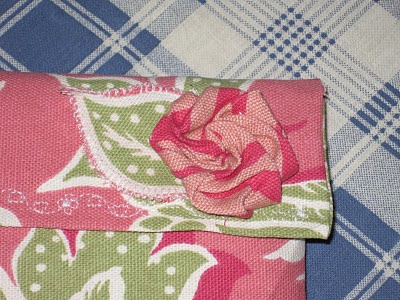 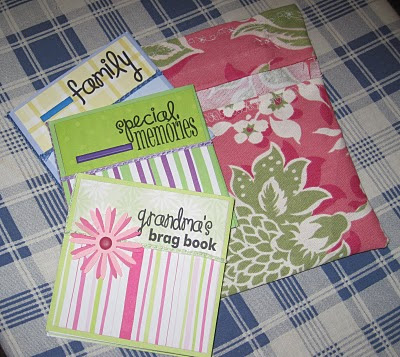 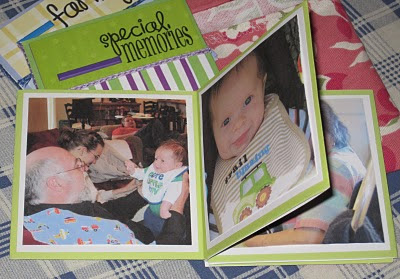 Our family was getting ready for a trip to Maryland for my brother's graduation from the Naval Academy and planned on attending The Graduates' Ball, and baby Jace would be wearing a suit! As dapper as he looked, the shirt just couldn't stay tucked in. I had seen this post on I Am Momma-Hear Me Roar a while before, and had made a mental note of it. I sure am glad I did! 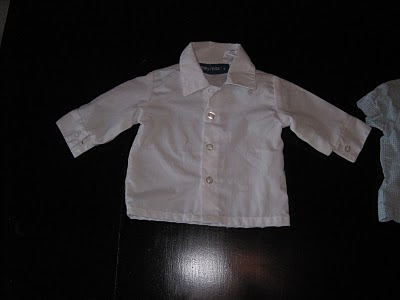 ...and cut off the bottom of a stained onesie (after all, who would be seeing the stain?), and sewed it on to the bottom of the shirt... 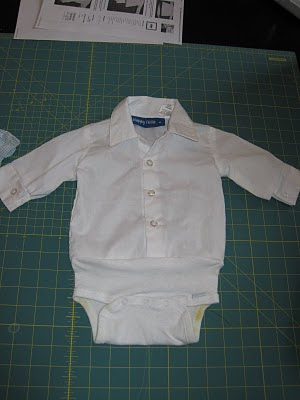 ...and in five minutes, I had the perfect solution to keeping Jace's shirt tucked in. Here he is proudly modeling mommy's work. 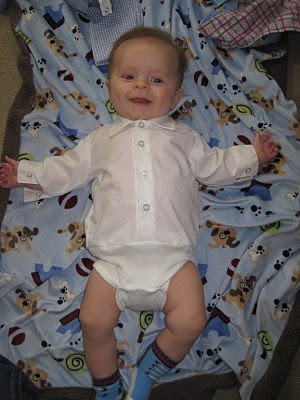 Looking super handsome (and tucked in) with Daddy, Mommy and Uncle Tim at the ball. 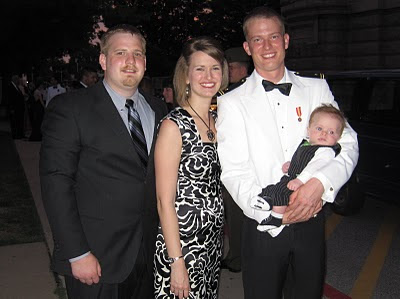