Jen at Tatertots and Jello is giving away and ADORABLE ruffle purse. (I won’t tell you how to enter to win it though, because I really don’t want any more competition than I already have.) I’ve honestly been thinking about this purse since I saw it. I love how huge it is. I love how sturdy it looks. And, I love the ruffles. I didn’t think it would be too hard to make one of my own, and was tempted to buy some fabric at Jo-Ann’s the other day (after all, I had sooooo many coupons thanks to September being National Sewing Month, and when you have so many great coupons, doesn’t it feel like a waste not to use them?), but thought I’d respect my husband and the painstakingly hard work he puts into our budget, and refrained from buying fabric.
Instead, I went digging in my box of clothes that are waiting to be taken to a consignment store or Goodwill. And yes, I referenced that box a month ago in this post, and honestly it had been sitting there for a few months before that. But it just keeps sitting there, so I just keep going fabric shopping in it. I found this pair of dress pants and shirt (the picture’s kinda crummy because I took it with my phone). 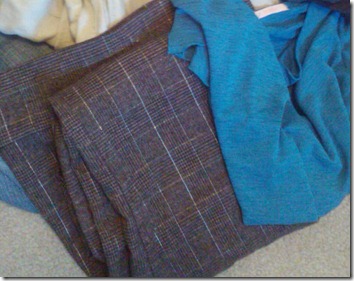 What you can’t tell about the pants in the picture is that the light thread is actually silver. I cut the pants down the seams, used the cuffs as the trim around the top, and the waist band as the straps (I left the button on because I thought it added a fun touch), made a few ruffles (and also used an old tank top for the lining), and pretty soon, I had this purse! 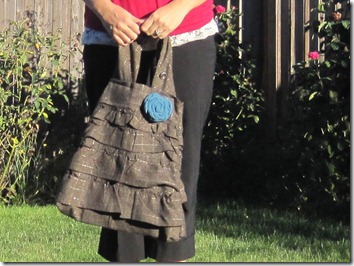 It’s not as wide as I would like it to be, but I was limited in how much fabric was available to me, and had to keep each side the size of the pant leg cuff. I felt like I was making a ruffled skirt for a little girl as I made it. In fact, when I showed it to my husband and asked him what he thought I made it from, he guessed a skirt. 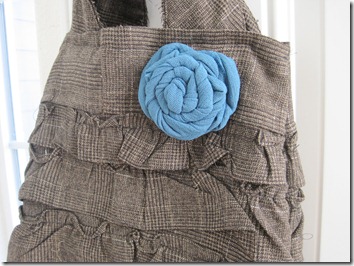 The rosette was made from the tie-band around the hem of a slinky like shirt (which I think I actually one wore once, and it was a hand-me-down from a lady at work’s daughter). I think I may have to make a few more of these. 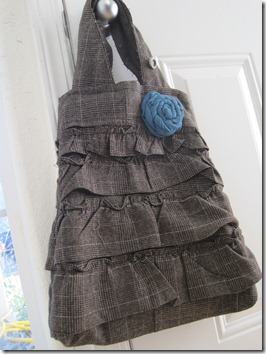 Yay for up-cycling!
Wanna know how I made it? Check out the tutorial here.

Check out all of these fun parties I plan on linking up with!
Posted by Jill at 6:00 PM