We do a Family Movie Night every last Friday of the month at my church (which is where I work as the Children’s Ministries Director). In October, we make it a bigger event by having the kids dress up. This year we’re showing StarWars: The Clone Wars (the cartoon), and challenged everyone to come dressed as their favorite StarWars character. Yay for another costume making opportunity for me! I decided to make a baby Yoda costume for Jace. It was so simple, only taking an hour, I thought I’d share with you how I made it.
But first, the final product: 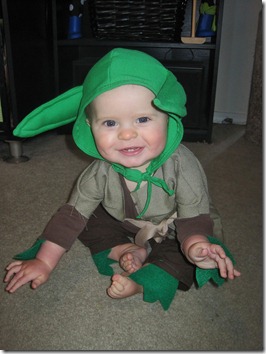 And now the process:
I wanted to keep it simple (since I’d made everything new for his Peter Pan costume), so I used a brown long sleeve onesie and pair of pants that we already had. 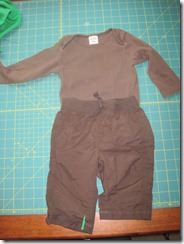 Using the hood of another hoodie as the pattern, cut out the two pieces for the hood out of a knit (they will be sewn up the middle). 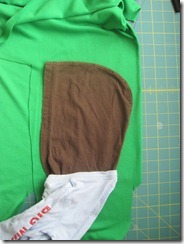 Sew the two pieces together around the curved top and side, leaving the other two sides open. 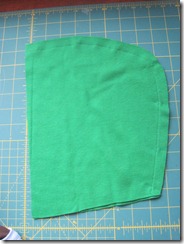 Fold the front edge under and sew. I used a decorative stitch that looks like I used a serger, but a plain straight stitch or zig zag would work fine. 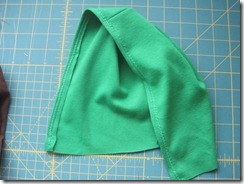 Try the hood on your baby (enjoy their absolute LOVE of wearing costumes and getting their picture taken). 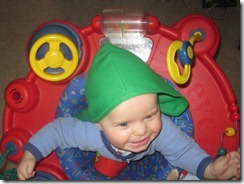 The hood peaked, taking away from the nice round shape of Yoda’s head, so I boxed the corner (which was more of a rounded corner). 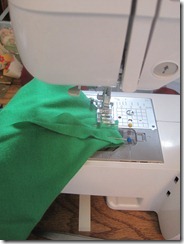 Much better. The picture’s blurry because the dog was trying to lick Jace. 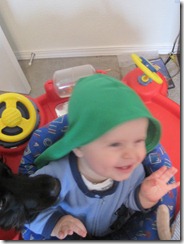 Since I was using a onesie, the neck was different than what you’d see on your typical hood. I didn’t want to sew the hood to both the back and front of the shirt because I was worried it would limit my ability to get the shirt over Jace’s head (the kid has a big noggin). That meant I’d have to use ties to keep the front around his face correctly. 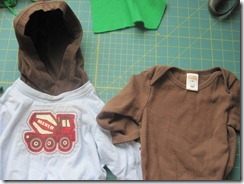 If you’re using a onesie, cut two strips of the green fabric, zig zag stitch down the middle (for the fun and look of it). 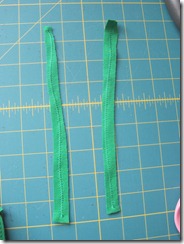 Pin the hood to the shirt at the collar, right sides together. If using a regular shirt, pin it all around the neck, overlapping at the front. If using a onesie, only pin along the back and stop a the shoulders. Fold under the remaining fabric that won’t get sewn to the onesie, pin the straps between the two layers, and sew until you get to the point where you’ll attach to the onesie. Sew with the onesie facing up so you can sew just along the line of the original serging on the shirt. 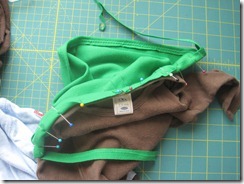 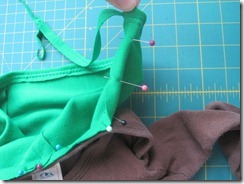 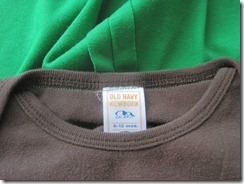 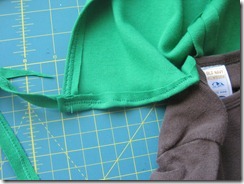 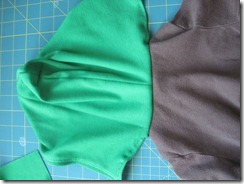 Now you’re don attaching the hood! Next, on to the ears. I found a picture of Yoda online and used it as my inspiration. 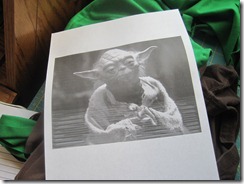 Cut out a pattern for the shape of his ears and cut 4 of it out of the fabric (remember to leave space for seam allowance). Sew the front and back of each ear together and then slightly stuff with batting. 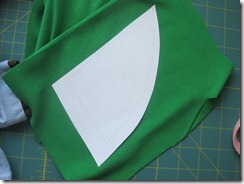 Sew about 1/4 to 1/2 inch in from the edge to give some definition to the ear. Because it’s already stuffed, this will give it some nice body. 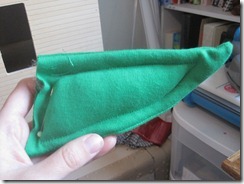 Cut two slits in the hood where you want the ears. I had the hood sit folded and used my rotary cutter so I could cut a nice slit in both sides at the same time, making them the same length. Tuck the ear through the slit so the cut edges of the slit and the ear are all facing the same way. Sew the ear to the hood. 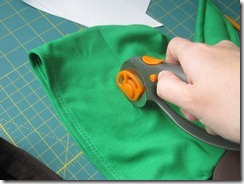 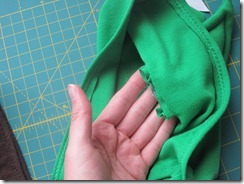 And you’re done with Yoda’s head! You can stop here if you’d like. Or, if you want to add some batting around the ears to help show Yoda’s age, you can. I figured, since my fabric was a darker green, this was a young Yoda. 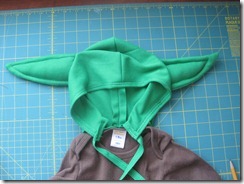 I wanted to also add hands and feet, so I cut them out of green felt, and sewed on to the cuffs of the sleeves and feet. 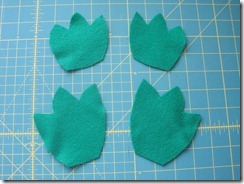 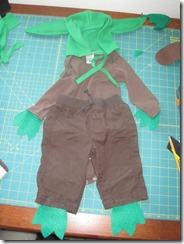 I also wanted Yoda to have his robe, so I cut a rough shape out of a lighter brown heavy weight fabric (my mother-in-law gave it to me… it was a table cloth once upon a time!), and sewed it together. 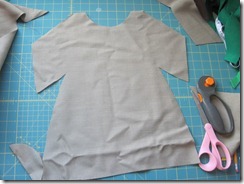 Then it was a matter of resisting the urge to wake up my napping baby to try it on. He finally woke up, and I was so excited to try it out. This kid loves to play dress up! He gets so excited when I put costumes on him.
Yoda with his light saber. 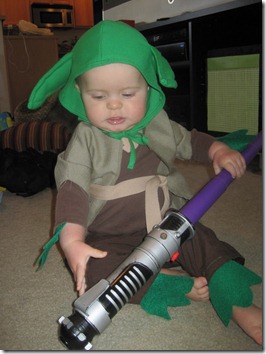 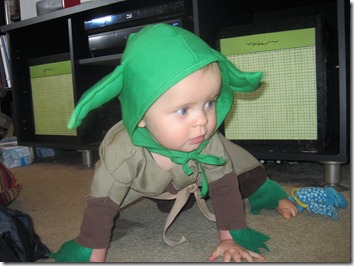 Yoda on the move… 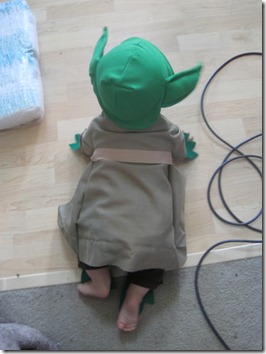 I’m linking this post up with the Halloween Costume Link Up Party as well as these other great link up parties!
Posted by Jill at 3:00 PM