How To Keep Your Tree from Falling

It was the Christmas of 2007. Nolan and I went out for our second tree hunt of our married life the day after Thanksgiving. We hiked around the tree lot on the beautiful (yet freezing) day for an hour. It was quite the accomplishment considering the tree hunt took three hours the year before. Then it was home with the tree, decorations hung, the house decked out, and festive music played. Ah, I loved the sense of accomplishment.
But then, at 1 am we had just settled down for a long winter's nap, when down in the living room there arose such a clatter. We sprang from the bed to see what was the matter. Down the staircase we flew like a flash... OK, different story. But all that to say, the cats had climbed the tree and knocked all 9 feet of it over. So instead of sleeping, we were re-standing the tree, picking up pieces of broken ornaments and attaching 70 pounds of weights and rope to the trunk to keep the tree up in case the cats decided to climb again.

The tree adventure wasn't finished though. The next day it still felt wobbly so we took it out of the stand, repositioned it and decorated it once more. On Sunday we bought more ornaments to replace to broken ones, and for the third time in one weekend, I decorated the tree.

Every Christmas since, we’ve placed 35 pounds of weights on each side of the tree, as close to the wall as possible, and tied a rope to the weights and through the tree. There’s no way the tree will fall in to the living room. If the cats happen to get too crazy, or the child pushes too hard, it’s possible it’ll fall toward the wall, but hey, the wall can catch it, right? 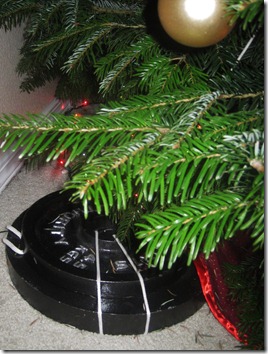 I love having a weight lifting engineer for a husband!
(And I just have to say, I must have one of the only 10 month olds in the history of the world who is not interested in the Christmas tree! I tried to take a picture of him sitting in front of it the first full day we had it, and a branch must have poked his neck or something. Since then, he won’t go within a few feet of the tree and occasionally reaches as far as he can to poke an ornament with his finger. Go figure!)
Visit these great link up parties!
Posted by Jill at 8:00 AM

Email ThisBlogThis!Share to TwitterShare to FacebookShare to Pinterest
Labels: christmas