Sorry for the lack of posts and the fact that I haven’t put up any tutorials from my Comfy-Chic Anthro Inspired Ensemble. I really was all set to get a tutorial up quickly for the sweatshirt-turned-jacket. And then I went and looked at the pictures I took in the process of making it. Yeah. Turns out I have a before, in process, and after picture. So I’m trying to figure out if just showing you pictures of parts of the final product and explaining what I did would do it would work, or if I need to go back and make another one. So much of this project was just making adjustments as I went. What do you think?

So between that dilemma, having Nolan’s sister in town and stay with us for two nights, my parents arriving, work, putting on Family Movie Night at church, oh, and a time consuming project for round 2 of Crafting with the Stars… not much has happened as far as getting blog posts up goes. But trust me, you’re going to love my entry for round 2. I so, so, so can’t wait to tell you all about it. Next week. After the results are announced.

But until then, I’ll leave you with a project I did to get my decoupaging wheels turning. It’s obviously not what I did for the contest. But it was a fun little Monday project.

I thought it would be fun to dress up the space above my headboard a bit. So I took an unused frame, some white computer paper, light blue tissue paper, Mod Podge and paint… 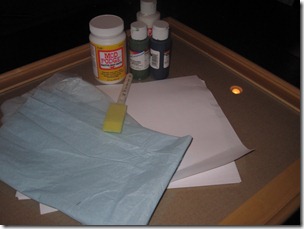 And made a pretty, whimsical tree picture. 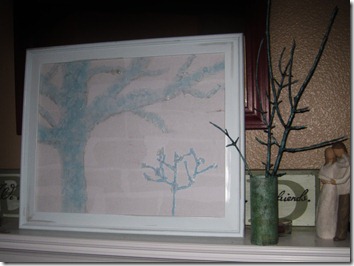 The strips of computer paper were decoupaged onto cardboard, and then I used little pieces of tissue paper to make the big tree. Strips of tissue paper were twisted to make the small tree. After the Mod Podge dried, I used a platinum colored stamp pad to accent and shadow the trees a bit. I think they kind of look like vintage fabric art now.

It seemed like the picture needed a little something to go with it, so I tinted some Mod Podge green and used it to stick more of the tissue paper pieces all over a small candle holder/vase. Then I cut some small sticks/branches from a tree outside and covered in in blue-green tinted Mod Podge and tissue paper. I think they’d look sweet on a shelf above my bed, with maybe a little plaque as well?