My mother-in-law is quite the thrifter. All of the Christmas gifts she gave this year came from garage sales or were made by her. Jace got some great toys thanks to her eye for a good deal. And that eye had the most amazing find a few weeks ago. She happened to stop at a thrift store near her doctor’s office and found some great remnants of fabric. She returned a few days later and, over the phone, described each piece to me, and I’d say if I wanted it or not. Then she went to another thrift store near by and found fabric by the bolts. Once again we went through each piece, me saying if I wanted it or not.

Today we had Jace’s birthday party (which I’ll post about soon!) and she brought all the fabric with her. It is beautiful. 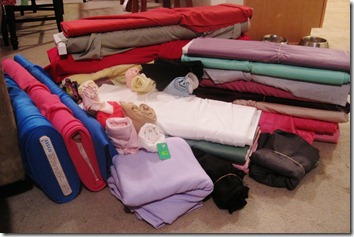 I don’t think she paid more than $7 for a bolt, and when I say bolt, I mean at least 10 yards. And not only that, many of them were marked 25 and 50% off. See that folded stack of purple in the picture above? It’s a really sweet ribbed knit that’s at least 6 yards! The blue bolt on the far left is about 42 yards!!! 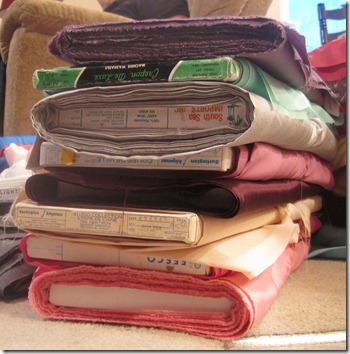 She kept some for herself, but for the most part, it’s all mine! After around with the thrift store workers, she found out that a lady’s estate was donated, and her fabric collection was so large because she had been a professional seamstress of some sort. 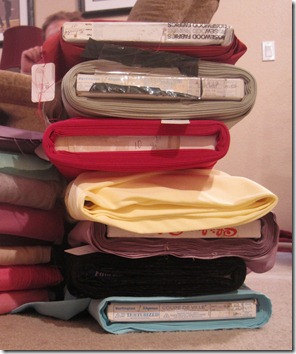 I’m already envisioning so many beautiful projects! Maybe now I can really get some inventory made for my etsy shop. 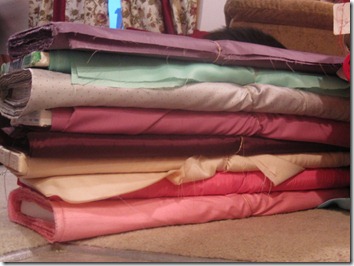 For those of you who have said you’d love a sewing basics series, I’m hoping to get started on that soon! And don’t forget to enter my giveaway. It closes Tuesday!

Ok, now I need to get off the computer and dream about pretty fabrics.