Shirts I’ve Made: Where are they Now?

Do you ever see cute clothes on blogs but wonder if they’ve actually held up to real life? I mean, most people post them right after completing the project. Are they really washable? Did they fall apart after holding a baby for more than a half hour? Is it really something that gets worn out in public?
I’m pleased to say that my Slubby Ruffles Top has become one of my favorite shirts to wear!!!
Here it is just after I finished making it: 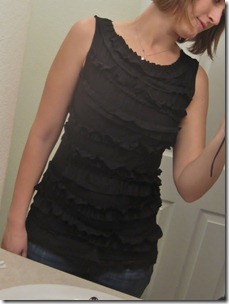 And here it is, as I wore it today: It has been through the wash (and dryer!!!) several times and I’ve worn it more times than I can count. I LOVE this top! I have paired it with cardigans and cute jackets, worn it with jeans and slacks, and get compliments on it every time. The ruffles have just slightly ruffled more since I left the edges raw. Today I wore it with a cardigan and the ruffled belt I made a while back. Compliments on both today! 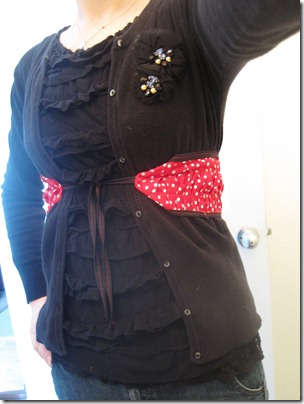 How have my other tops held up? Here’s a run down for you:
Layered Strips Top: For the most part it’s done well. I’ve worn it several times, but one of the side seams didn’t finish right so it’s coming apart. Just need to re-stitch it and it’ll be good to last!
Basic Black Shirt: Been washed and dried and still doing great!
Turtle Neck Refashion: One of my favorites to wear. I think I may have worn it twice last week??? Washes, dries and holds up just fine.
Ruffle Collar Top: Been worn a couple times but haven’t washed it yet. I’m thinking I need to find a white cardigan to wear with it as well. Still loving it though!
Comfy Chic Anthro Inspired Ensemble: Only worn it once. It takes a bit of fiddling to get to sit right so that stops me from wearing it. The snaps were placed perfectly for it being worn by someone else, so I think I need to adjust where they are so it fits me better. I also need to figure out a different rosette pin to wear with the cowl—the current one is just too heavy for long wear on your collar.
Pleated Ruffle Shell: Been worn, washed and dried several times. Doesn’t have the same crisp look to it as when first made, but I still like it. I think I want to take it in a bit at some point so it has a little more shape to it.
Raw Ribbons Top: Another one of my favorite shirts to wear. It has held up great in the washer and dryer!
Sweater Turned Cardigan: I’ve worn this one several times as well! It’s really warm, though, so I don’t think I’ll be wearing it much more for a while.
Red Ruffled Tops: I haven’t worn the 3/4 sleeves one much, mostly because I need to figure out a better sweater/jacket to wear over it. The short sleeve one hasn’t been worn much either because it’s short sleeved. Looking forward to wearing it more soon!
Blue Flutter Flower Shirt: Wore it several times, washed it and laid it out to dry. Two of the flowers fell off in the wash because I hadn’t tied them off well enough. Just need to sew them back on and it’ll be good to wear now that the weather is warming up!
Thanks for stopping by!
I’ll be linking up with Nina’s Real Momma, Real Style. Check it out!

Email ThisBlogThis!Share to TwitterShare to FacebookShare to Pinterest
Labels: clothes for me