I have been drooling over the Sunny Soiree and Blooming Goldenrod (which unfortunately is no longer available) dresses by Anthropologie for a while now. So when I needed to upcycle something, I thought what better opportunity to knock them off than this? What I love about the way this one turned out is that while it was inspired by Anthro, it is its own unique dress. 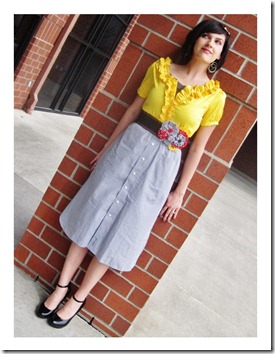 I began with a men’s dress shirt (a very fine grey and white stripe), a large yellow woman’s blouse, and a jumper (which hardly ended up being used). 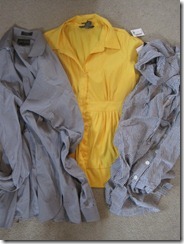 I laid out the men’s dress shirt nicely, all buttoned up, and then used a skirt that I like the fit of as a pattern. 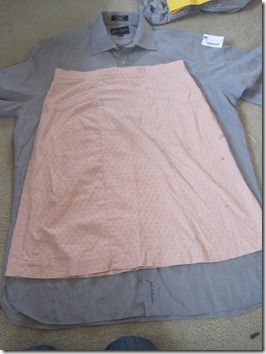 I left it longer than the skirt and didn’t cut anything off the bottom so I wouldn’t have to hem it. 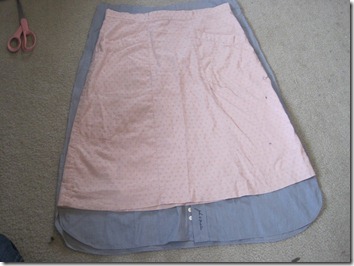 I then laid out a dress that I liked the cut of the bodice on. I wanted wider straps than the dress though, so I just cut extra around the straps. 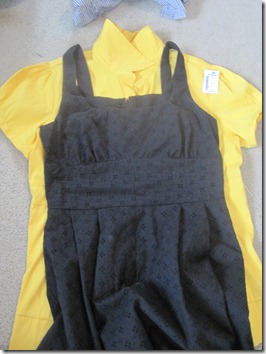 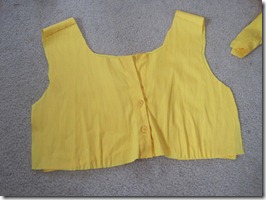 I liked the way the gathers in the back didn’t get cut off. 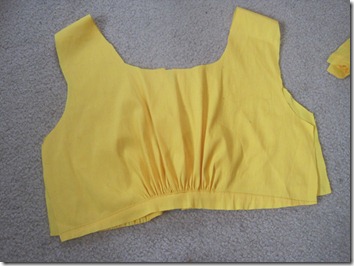 The hem band of the shirt was saved to be used as the waist band on the dress. 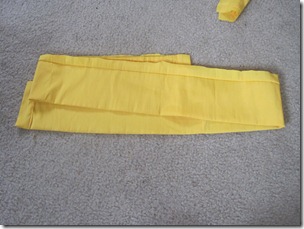 And other strips of fabric were cut from the remaining fabric to be used as ruffles. 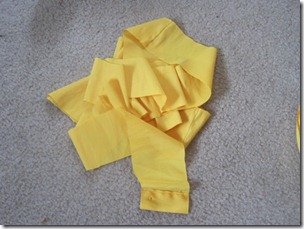 At this point I realized that I really didn’t want to figure out a way to finish off the arm holes, and the original sleeves were completely salvageable—they were just large. So I cut the sleeves from the original seams and then trimmed off the excess so it would fit my new arm hold.

I cut the new waist band to be double the width of the shirt (so it could go around the whole dress) and left an extra 1/2 inch to sew it together into a band with a 1/4” seam allowance. 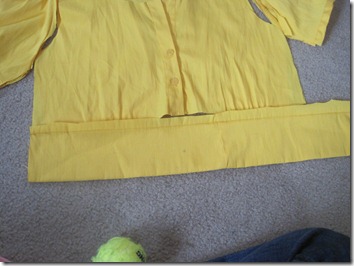 Sewed the side seams together for the skirt. 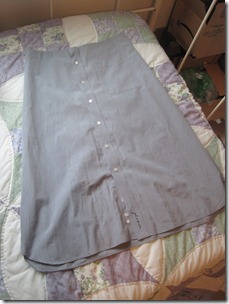 I used my rolled hem foot to finish off the edges of the strips of fabric for the ruffles and then used my ruffler foot to ruffle the strips directly onto the shirt—around the neckline and then down the button hole side of the shirt. I stopped just above the buttons on that side so ruffles wouldn’t have to overlap each other. 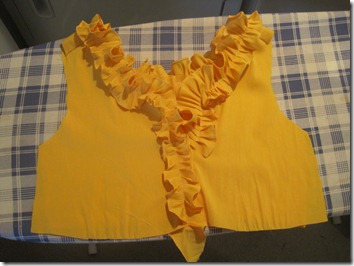 Sewed in the sleeves (we don’t have to get into how I accidentally sewed one sleeve on inside out twice). 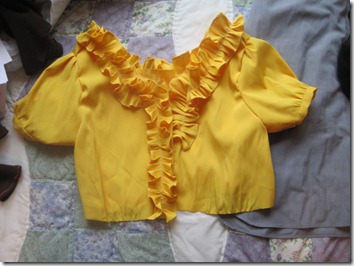 Sewed the waistband onto the bodice and then attached the skirt. 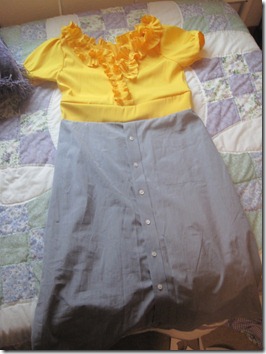 At this point I started playing with material from the jumper to make the sash like both Anthro dresses had. I really didn’t like the way it was looking at all. Even though it’s longer than the finished version would have been, it just wasn’t something I was happy with. To me, it looked frumpy. 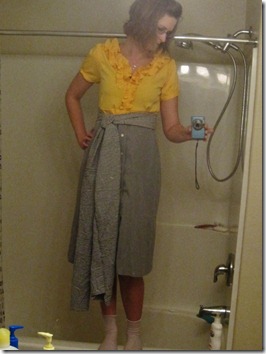 I actually disliked it so much that I threw the dress in my scraps pile and went on to start another project. But I didn’t like that one much either, so I returned to the dress. That was when I remembered an old elastic belt of mine. It was exactly what I was hoping for! I made a large yellow flower from the leftovers from the shirt, and two flowers from the men’s shirt material and two from the jumper. A pop of red was just the right finishing touch to pull in the red from the belt. 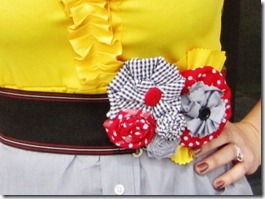 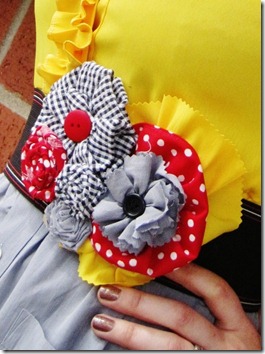 Then just grab a gorgeous model and you’re set to go! 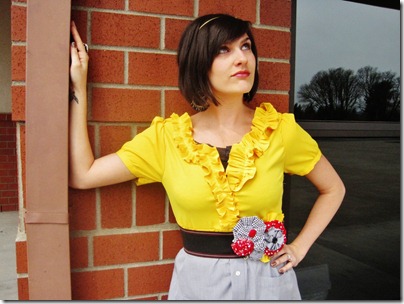 I do love this dress and look forward to wearing it! 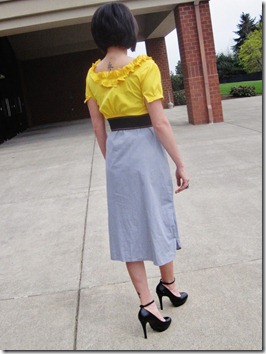 Parties I'll be linking up with:
Hoo’s Got Talent, The Sunday Scoop, The Sunday Showcase Party, Made By You Monday, Market Yourself Monday, Making the World Cuter Monday, Weekend Wrap Up, Motivate Me Monday, Frugalicious Friday, Feature Yourself Friday, Just Something I Whipped Up, Mad Skills Party, Get Your Craft On, Anything Related, Make it Yours Day, The Shabby Nest, Kojo Designs, Tea Rose Home, Whatever Goes Wednesday, Real Momma, Real Style, Idea Sharing Wednesday, Creative-ly U
Posted by Jill at 10:12 AM

Email ThisBlogThis!Share to TwitterShare to FacebookShare to Pinterest
Labels: accessories, clothes for me, flowers, sewing, So You Think You're Crafty, SYTYC, tutorials, up-cycling