Um. Can you believe it’s the last day of September? I feel like it was just August. I’m really proud of how well I’ve done with not spending money on clothes or fabric for clothes. I think I only felt tempted once. And now as I head into October, I don’t feel the need to rush out and buy something. Perhaps I broke a habit? What I am feeling the need for is shoes. And it’s a genuine need. Summer time was great with getting to wear flip flops every day. But now as I’m facing a need for some solid, cute footwear. I’m finding my non-high-heeled options are just a little limited. Like a pair of boots or my nude Target flats. And life with a toddler calls for flats. So I’ll be on a hunt for those very soon. It might prove difficult since I’m cheap. Ok. Enough rambling. On to what I wore this week.
Friday, Saturday and Sunday were spent in lazy wear, like pajama pants, a Navy sweatshirt, glasses and scary face and hair. I thought I’d spare you the horror and didn’t take pictures. 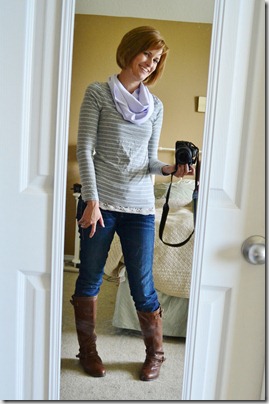 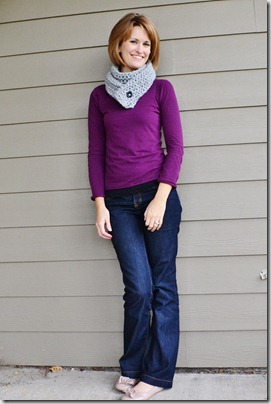 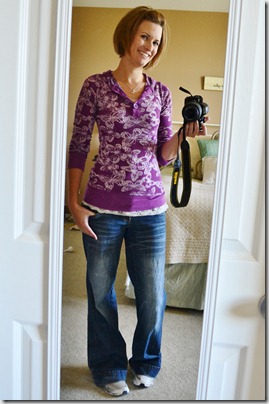 Wednesday: Causal and comfy. I’m now rethinking ever wearing these jeans again. I liked them the first few years I owned them, but maybe now they’re just not as flattering as they used to be? They’re Hydraulics from Maurices. Top and cami from Maurices as well. 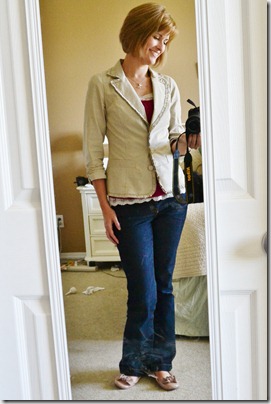 Thursday: I was a guest speaker in a class at my alma mater, Corban University. Pants—Gap Long and Leans. Jacket—Maurices… 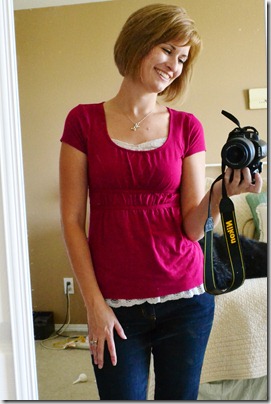 I love the top I wore under the jacket so I had to show it too. It’s from Anne Taylor Loft a few years ago.
I’ve enjoyed taking pictures of my outfits each day because it makes me actually put a little more effort into being creative with my outfits. It also gets me to make the bed each day. So I just might keep this up…

Email ThisBlogThis!Share to TwitterShare to FacebookShare to Pinterest
Labels: No Spend September, What I Wore