My younger brother turned 28 last week. He’s about as bachelor as you can get—living with several guys, his dogs are his world and putting together healthy meals isn’t a high priority for him. Not to mention, his funds are really tight, so once his money runs out each month, he just lives on peanut butter and jelly. He doesn’t usually get too excited about birthdays, and feels guilty when we give him gifts. So this year I came up with the perfect gift that he couldn’t refuse—freezer meals.

The key to making these meals work for him was storing them in individual portion sizes and making sure they would be easily reheated—no crock pot meals for him! I ended up giving him 13 meals—seven of a ham and potato casserole and six of my favorite taco soup. This ham and potato casserole is one of my favorites and quick to throw together to either eat that day or freeze for later, so I thought I’d share it with you! 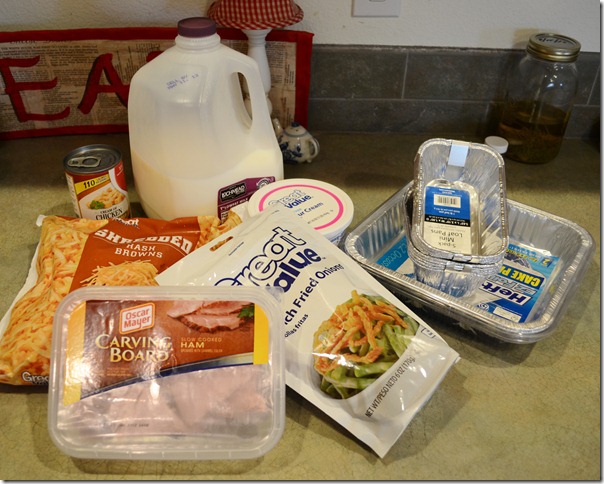 You’ll need:
-Small package of frozen hash browns (because I was making meals for my brother, a frozen dinner for a friend who just had a baby and dinner for my family, I used two large bags from Walmart). If you’re planning on freezing the meal, just use the hash browns frozen. If you’ll be cooking it that day, thaw them first.
-1 can cream of chicken soup
-1/2 cup sour cream
-1/2 cup milk
-1 container of fried onions
-1 package cutting board style lunch meat ham (or you could just use any cooked ham, but using the package of lunch meat makes it very easy and the cutting board style is key so it’s thick)
-1 cup cheese (not pictured)
-Pepper (not pictured) 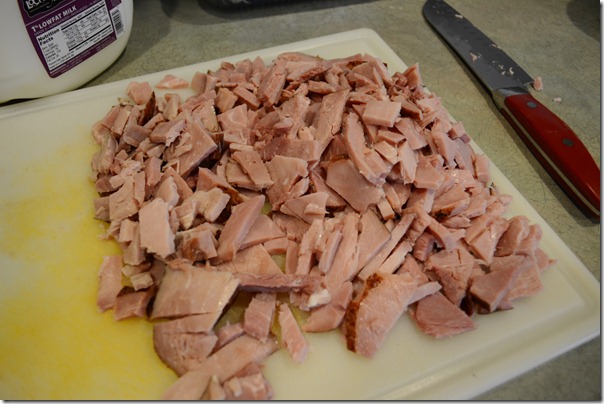 Chop up the ham. I was using 3 packages since I made so many meals, which is why there is so much ham here. 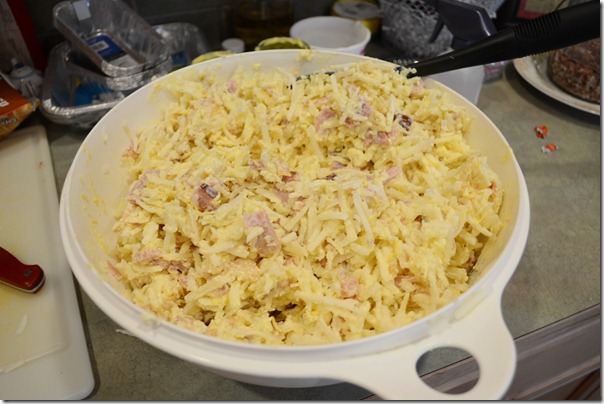 In a bowl, mix the cream of chicken soup, sour cream, milk, cheese and 1/2 teaspoon of pepper. Stir in the ham and half of the fried onions. Then add the hash browns and mix until everything is evenly coated. 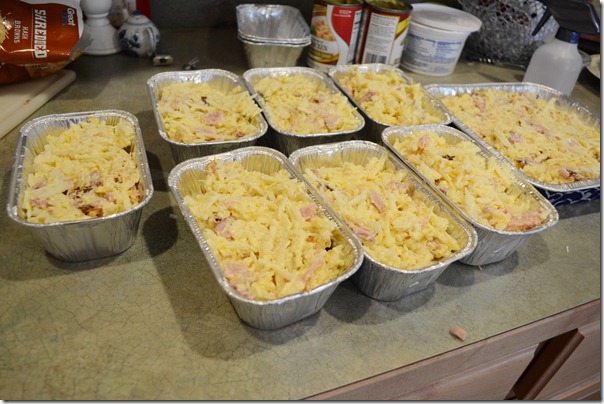 For my brother I filled the mini aluminum tins, and a square cake tin for my friends. My portion went into a baking pan. 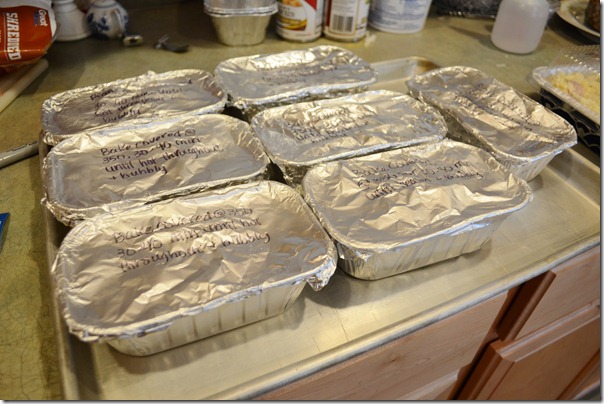 I topped each pan with foil and wrote the baking instructions on it. For my friend, I told her to allow it to thaw in the fridge and then bake uncovered at 350 for 20-30 minutes until heated through. I also gave her a bag of the remaining fried onions to top the dish with for the last 3-5 minutes of baking. For my brother I didn’t think he’d ever warm a meal if he had to thaw it first, so I told him to bake it covered for 30-40 minutes and didn’t give him the onions to top them off with.

It was so fun showing up at his house with a cooler full of food for him. He said he couldn’t wait to eat them and wanted to make sure I wasn’t giving him any restrictions on when he could have them. I said if potato casserole sounds good for breakfast, go for it! I’m glad to have found a gift he’ll enjoy and think I’ll have to make freezer meals for him more often.

Parties I like to link up with:
Hoo’s Got Talent, The Sunday Scoop, The Sunday Showcase Party, Made By You Monday, Making the World Cuter Monday, Weekend Wrap Up, Feature Yourself Friday, Just Something I Whipped Up, Get Your Craft On, Kojo Designs, Real Momma, Real Style, Tutorials and Tips Tuesday, Sew Cute Tuesday, Make it, Wear It, Show and Tell Saturday, Weekend Bloggy Reading, I’m Crafty Party, Transformation Thursday, Take a Look Tuesday, Simply Link Party
Posted by Jill at 11:17 AM