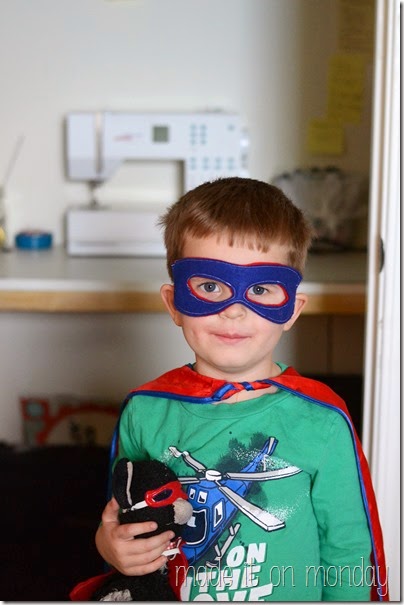 Somehow this little mask wearing, cape sporting, special stuffed kitty toting little boy of mine turned 4 last month. His past birthday parties have been very theme oriented: Police, Things That Go, and Hungry Caterpillar. We usually have the party at home and just invite family since we don’t have space for more people. But Jace has made some good buddies this past year, so we decided to have his party at a pizza parlor in town. I thought we’d go with a fully pizza themed party and pinned some cute ideas. And then I made the mistake of letting Jace look at Pinterest with me, and he fell in love with a Play-Doh cake. So I guess you could say that this party was brought to you by the letter “P” for pizza and play-doh. 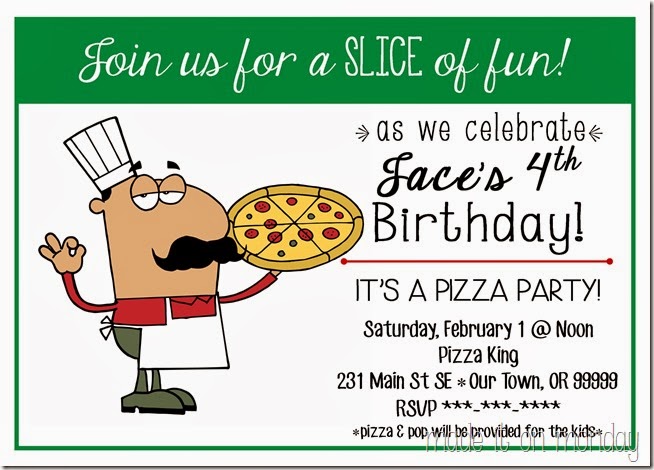 I designed his invitation in Microsoft Publisher and then just had them printed as 4x6 prints at Costco. Seriously, if you’re able to design something yourself, this is the cheapest way to do personalized invitations. The only hesitation I had in the past for a pizza party was how to afford it with all the guests.  And then a friend invited Jace to his pizza part and noted on the invitation that pizza and pop would be provided for the kids. There was nothing rude about it, just a subtle way of saying that parents could buy their own food. Nolan and I had no problem with it and knew what to expect when we arrived. So we did the same thing with our invitation. Our pizza parlor had a kids party package where pizza, pop, and icecream were about $3/child. I figured a party at home would have cost more than that with food and decorations, so it was a great deal for us. Plus, I didn’t have to clean my house before or after the party! 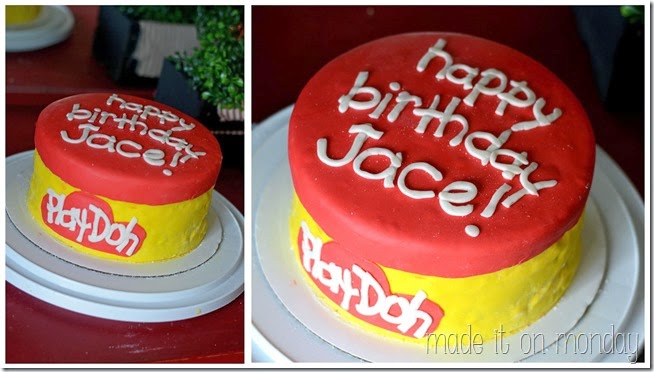 Jace was VERY stuck on a play doh cake (there was no convincing him otherwise), so I got to try my hand at fondant for the first time! I used THIS recipe for the cake (which a friend affirmed the choice saying that typical box cakes they used in the past weren’t strong enough to hold up well to the pressure of applying fondant), THIS recipe for the buttercream between the layers and for the crumb coat, and THIS recipe and instructions for the marshmallow fondant. I used the Wilton color gels to get the color that I wanted. And I gotta tell you, the cake was good. People who said they don’t normally care for fondant (or cake for that matter!) liked the cake. You can definitely see that I’m a fondant newbie with the lumpiness of the cake, but it’s more from not getting the buttercream smooth enough underneath. I followed THIS tutorial for putting your fondant on the cake. To do the decorative logo and lettering, I drew the lettering with a sharpie on parchment paper, then flipped it over so the mirror image was up, greased the paper, and then applied white strips of fondant to it to make the letters. I then brushed those with water and applied it all at once (or one word at a time for the top) to the cake. It worked great! 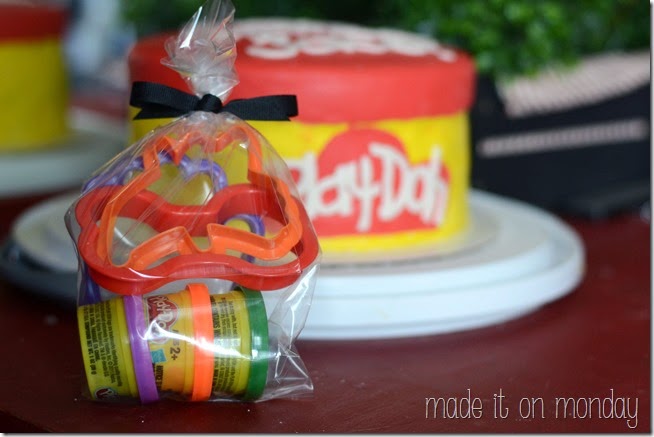 Goodie bags were cellophane bags with three mini cans of Play-Doh and 3 cookie cutters. I bought a set of cookie cutters like THIS ONE at Walmart for possibly $10? $15 at the most. It came with 101 cookie cutters, so there were plenty left over for us to keep. We’ve loved having them for Jace to use with his play dough (which he’s obsessed with), and I’m happy to boost my collection. The pizza parlor we had the party at has a play set inside as well as a small arcade. We took a roll of quarters so each kid could do/get something from the arcade. It turned out to be one of the best decisions we made! Since there were only 8 kids between the couple of buddies and cousins, each kid got at least 4 quarters. They loved being able to get get prizes from the machines and then playing with those prizes. 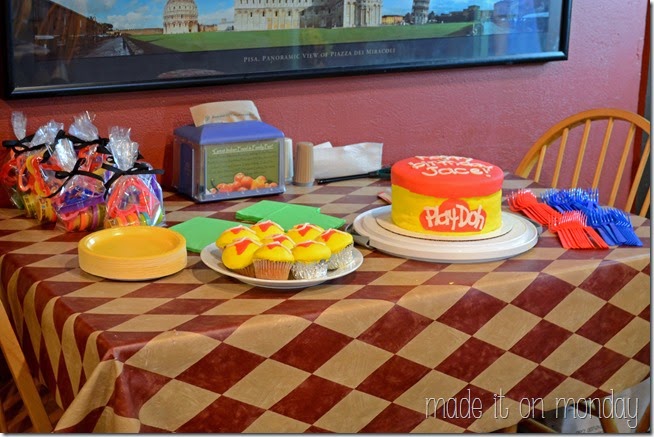 I made a double batch of the cake and just a single batch of the fondant, and was able to make a 3 layer cake and 8 cupcake. It was fun adding my own touches of colorful plates, napkins and cutlery even though we were at a restaurant. 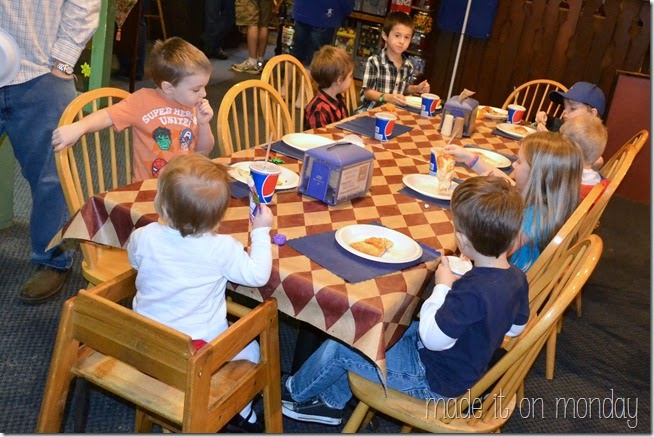 The kids had fun sitting all together at a table for their pizza. 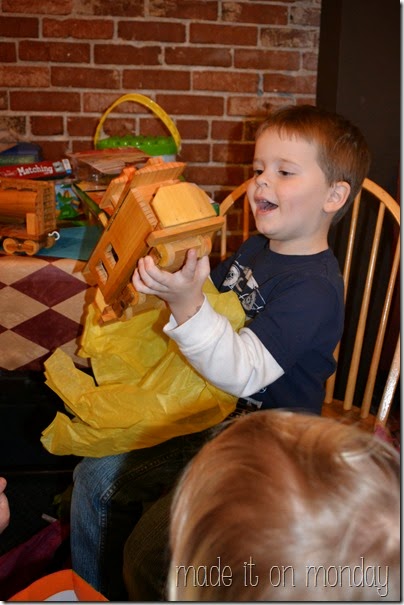 Nolan’s dad is excellent at wood working and made Jace a beautiful wooden train. Each car is a little over a foot long, and the attention to detail is amazing. He was so excited about his train! 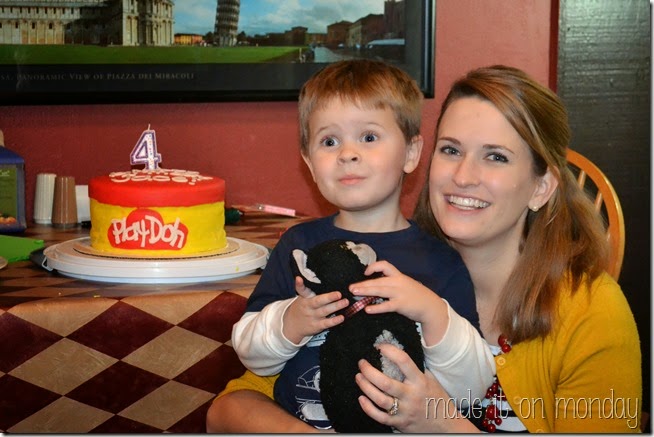 Me and my four year old. Poor Jace was pretty subdued most of the party, and that night came down with a fever followed by a nasty bug. What a way to spend his birthday! We loved celebrating Jace and I love that his party reflected him, despite how much I tried to influence it!

Parties I like to link up with:
Made with Love, The Sunday Showcase Party, Weekend Wrap Up, Make it-Wear It, Show and Tell Saturday, Weekend Bloggy Reading, Take a Look Tuesday
Posted by Jill at 6:00 AM