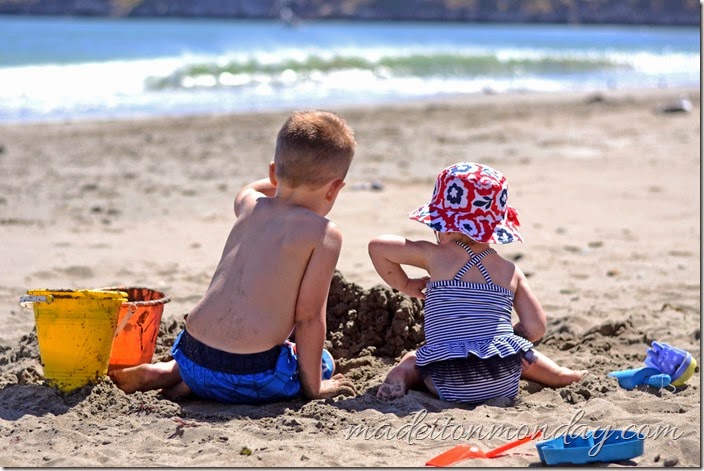 The kids (ages 1.5 and 4) and I spent the last week and a half in California meeting my newest nephew (who is adorable and we absolutely LOVE), visiting my grandparents and some aunts and uncles, and having a blast on the coast with my parents in Cambria. We built sandcastles and let the sun kiss our cheeks. 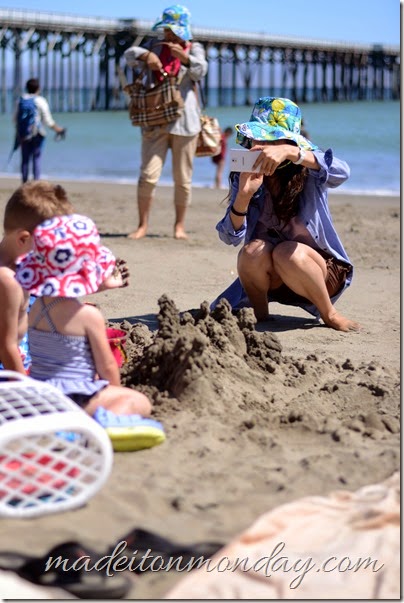 And my kids were irresistible to some Chinese tourists. I don’t blame them. My kids look just about as grilled-cheese-and-french-fries American as you can get. 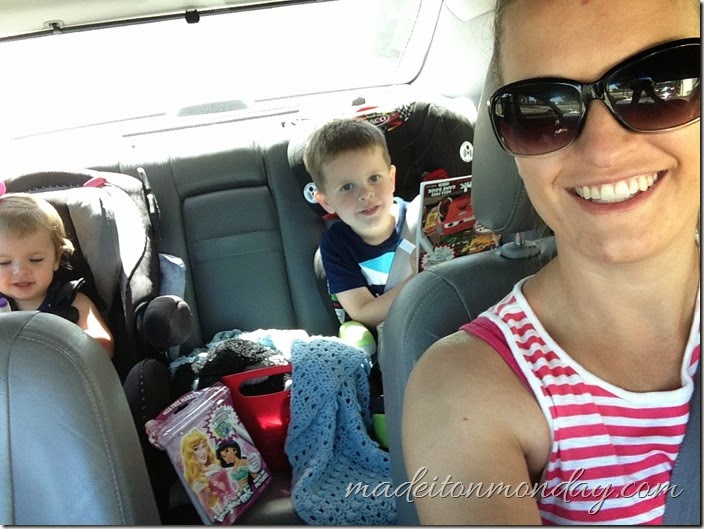 And the most impressive part of the trip? We drove there and back just the three of us. Nolan is in the middle of a crazy busy construction season at work and there was no chance at our entire family making the trip. But when my mom offered to have us join them, I proved to have enough determination and stubbornness to not let the idea of a 12+ hour drive by myself daunt me. I figured that with some careful planning and lots of preparedness and the awareness that my attitude was the biggest influence on the trip, we could make it happen. Two years ago I shared THIS post about road trip activities for two year olds. This time around I took a similar approach to the kind of activities I packed, but my set up was different. 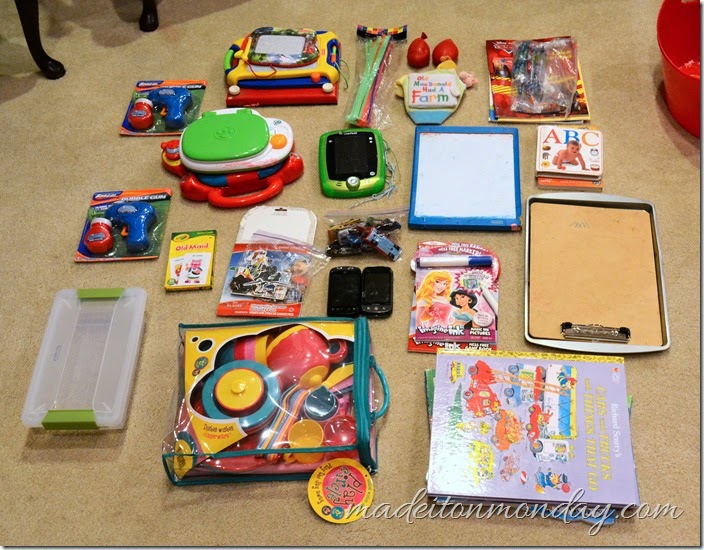 (Excuse the horrible lighting—I took these at night) 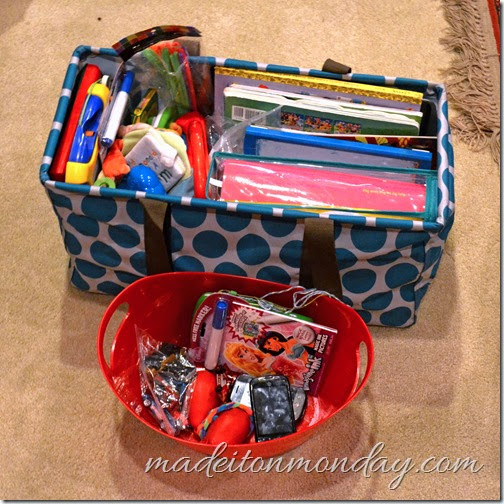 Most of the activities were loaded into my large 31 tote bag (which I LOVE), and a few more in the red bucket (Target dollar spot). 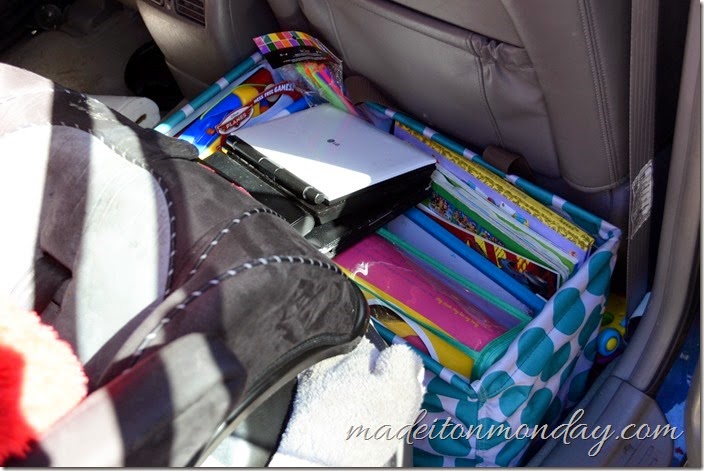 The tote bag was put on the floor at Reese’s feet. Tip for you when choosing where your kids sit: put the one who will need your help the most behind the passenger seat. This way you can easily reach them and hand them things will driving. It took a lot more focus/coordination to give something to Jace behind me, so it was a good thing he didn’t need as much from me. 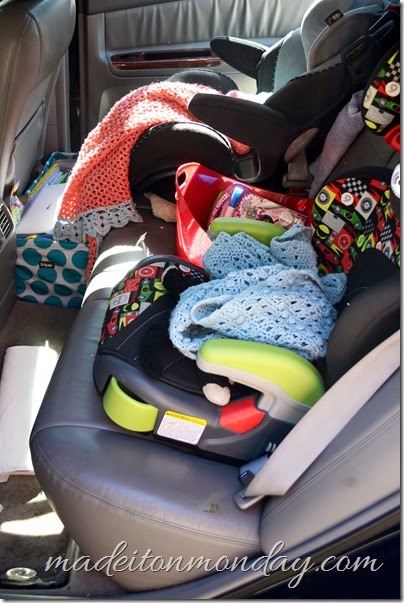 The red tub went between the two kids and at each spot I would trade out which activities were in it. Then, as they needed something else to do, I could tell Jace to get ____ from the red bucket. It allowed Jace to be helpful. This was one of the best things I did. Other times I had to reach in the tote on the floor to grab things, and I became really good at feeling which toy was which, but the red tub was very helpful. 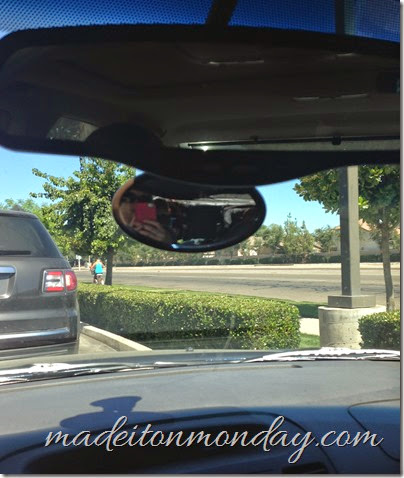 Up front there were three things that made my trip a lot better—an extra mirror (SIMILAR) that allowed me to keep an eye on the kids, a bucket full of squeezies, fruit snacks, capri suns and candy and snacks for myself, and audio books. The mirror was so helpful to be able to easily look at the kids and there were a few times that I caught Jace about to touch his sister in a way that would freak her out. I love that thing. The snacks were handy when Reese reached the point where nothing else would contain her. I found some baby-safe fruit snacks at Target that made me feel comfortable handing them back because I didn’t have to worry about her choking on them. And the squeezies are always a big hit with both kids.

Audio books kept me alert, awake and from getting bored. I signed up for the free Audible trial on Amazon and was able to download two free books to my phone. It hooks up to my stereo, and I just turned the volume to only play out of the front speakers. Anne Shirley kept me company on the way down (Anne of Green Gables is a 10 hour audio book), and Margaret Feinberg (The Sacred Echo) and Anne (Anne of the Island) kept me company on the way home. I wanted books that were ok for Jace’s absorbent ears to take in while still keeping my attention and these were perfect. In the back seat the kids traded off between Frozen and Cloudy with a Chance of Meatballs on the mini DVD player.

We survived and I’d say we survived well. There were several awful moments of Reese practicing the worst ways she could scream the word “Nnnnnno! Nnnnnooooo! NO!” with a grin on her face as Jace sobbed beside her because “Reesey is hurting my ears!” Or the fact that I made the mistake of rubbing Reese’s foot to try and console her once, and from then on, if I didn’t respond immediately to the command, “Feet!” she would break out screaming the word over and over again. She especially wanted her feet rubbed when I was driving through tight curves. But we made it. And I think one of the biggest reasons is because I went into it knowing I had to keep it together. So when Jace whined (which wasn’t often), I didn’t whine back. And when Reese screamed, I didn’t scream back (except for a few times when I just needed the relief of yelling). And I figured we’d have to stop over and over again. So it didn’t frustrate me that what could have been a 12 hour drive turned into an 18 hour drive each way (thankfully we stayed the night with my aunt and uncle part way).

We had a great trip. We’re happy to be home. And now I’m exciting to get on with summer!

Thanks for stopping by!
Posted by Jill at 12:00 AM

Email ThisBlogThis!Share to TwitterShare to FacebookShare to Pinterest
Labels: life, parenting, summer, This 'n That, Tips and Tools